A shell duck took off from the vicinity of Willow Pond and flew in a big circle around the Reserve this morning. 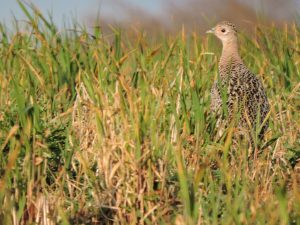 Yesterday early evening we spotted two grey partridge in Flora field, the first time for over a year!

This morning around 7.30 whilst walking the dog in the orchard I heard an unusual squawking and looked up to see a parakeet flying by. It came from Edenbreck direction and flew quite directly in the direction of the canal

In the last few days we have seen (and heard) a chiff-chaff in The Orchard.

Also  a blue tit using O14 nest box, song thrush in Big Meadow and The Paddock, a sparrow-hawk in Pony Wood then hunting along by the willows in The Hay Meadow, long-tailed tits and the usual finches.  Plus a tortoise-shell butterfly in the Flora Field margin

The final snipe count for this winter put up 13 snipe, all common. Seven in Big Meadow, two in the Hay Meadow and one lurking in Upper Sowerholme. Plus three in Flora Field, where there have been quite a few sightings recently. The muck spread on the arable is proving an attractive complement to the usual the marsh habitat? Overall, it remains a very poor season in terms of snipe numbers for the reserve, with the total counted just 150, less than half last year’s tally.

School Pond is still popular with the teal – 11 noted. A heron was spotted, as was a hare in Lower Sowerholme.