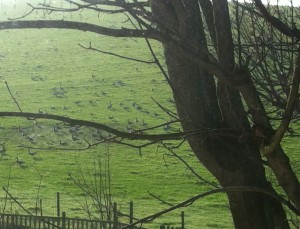 The Saturday morning volunteer session saw 22 volunteers attend despite miserable wet weather at the start. The weather did improve.

Part of the large flock of geese currently feeding on the hills adjacent to West Field actually crossed the boundary and explored West Field for a short time this afternoon. They do seem to regard the hedge as a rigid boundary (my own amateur theory is that the hills are heavily manured and thus have new grass shoots) but perhaps this little foray will lead to more extensive occupation.

Also yesterday I saw two song thrushes flying from the Pads footpath across Big Meadow to the hedgerow near Lucy Brook. I believe it’s some time since anyone has seen thrushes.

Snipe numbers on the reserve have previously been on a rising trend at this time of year. Not so today. A measly total of 38 (including 2 Jack), down on December and considerably lower than January in the past two years. Picking Jon’s brain for an explanation and the mild weather is probably a factor, allowing the snipe to disperse more widely. But the recent flooding could also be playing a part. It is creating new (albeit temporary) pockets of habitat full of drowned invertebrates, which present lush feeding opportunities. The number of snipe roosting on the reserve therefore may well be higher than this count suggests.

In terms of spread between the fields, the Hay Meadow again yielded a higher number than anticipated. 11 birds, principally flying off from around Cromwell’s Pond. This marsh is now full of standing water, so perhaps this greater wetness is more attractive. In contrast, the Big Meadow marsh was not much wetter than normal and only 9 birds were counted, including the 2 Jack. School Pond yielded 14, Upper Sowerholme the remaining 4. But still no woodcock, nor were there any teal on School Pond.

Other highlights: a single long tailed tit in a tree by the Fauna footpath near School Pond, a female reed bunting near the old alder tree and two meadow pipits in Big Meadow.