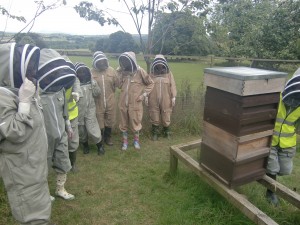 Four members of the Fairfield Association visited Lancaster Beekeepers’ Apiary on 27th July 2014 as part of the HLF Adult Education programme. We joined a guided tour offered as part of the Beekeepers’ Annual Open Day. The tour began with kitting us out in ‘bee suits’ followed by informative talks by the Chair and Health and Safety Officer. We were then taken in small groups to inspect hives which were dismantled for us as the beekeepers explained the working of the hive. We all survived for tea and cake and purchases of honey.

The apiary has been constructed by the Beekeepers’ experts and is a very impressive site with wonderful views toward Ingleborough and good facilities not only for the bees but also for the training of new beekeepers. Whilst I don’t think any of us were tempted, we all admired the work this group does to preserve and develop beekeeping in the district. A successful and informative visit. 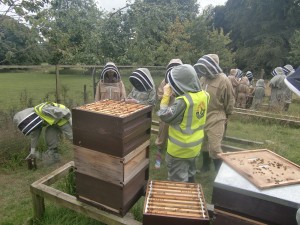 The wellies must be  a clue!

On July 10th a group of 9 of us visited Brockholes  ( Lancashire, Manchester and N. Merseyside Nature Reserve) where we were given a guided tour by one of the very knowledgeable conservation volunteers. It was an idyllic summer evening. We had good sightings of hares but otherwise probably a little hot for wildlife.

The reserve was created from farm land and gravel pits so has a range of habitats and is much bigger than the Fairfield reserve. It is a lovely place to visit – interesting for us to see what they are achieving ( just a couple of years ahead of us), with a range of activities for children and adults. And traffic permitting less than half an hour down the motorway to junction 31. 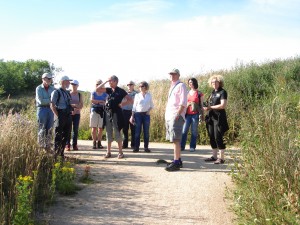 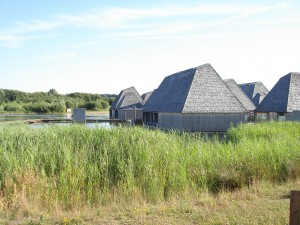 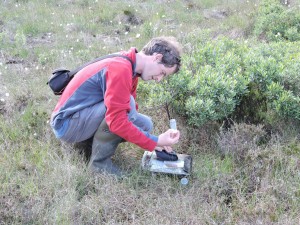 On Sunday morning a small group of Fairfield members visited the Wildlife Trust site at Heysham Moss. The forecast was for heavy showers – in fact we spent the mornng in the warm sunshine. We watched as Reuben Neville released 2 Large Heath butterflies, reared in captivity ( see photos) before exploring the reserve. The site (an SSI)has three habitats: meadow ( grazed by 3 of Bill Grayson’s Redpoll), woodland and raised peat bog.The peat bog is of special significance, 3 m deep it has taken 4 thousand years to form and is home to specialized plants which can thrive in the acidic nutrient – free environment. We saw the carniverous Round-leaved Sun-dew which digest insects, learned about the medicinal properties of the highly aromatic Bog Myrtle, and the war-time use of Sphagnum Moss as a dressing and spotted Bog Rosemary and Wild Cranberry amongst the pink flowered Cross-leaved Heath and Cotton Grass.
The bog was alive with dragon flies and damsel flies and the margins with bees – truly a wild and magical place. 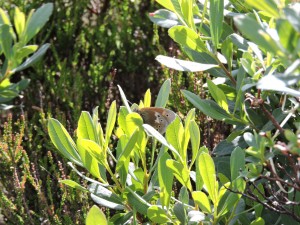 Our speaker on May 15th runs a website on wildflowers: www.seasonalwildflowers.com
It works month by month with excellent photos and is worth taking a look at.

We have held two outdoor sessions on the Open Learning Programme for which there are of course no slides or podcasts. The first was last October – a Friday morning threatening rain when a small group of 6 or so went round with Richard Storton. For some it was the first chance to get into the Flora fields and up to Pony  Wood. Richard talked us through the plans and the reasons for some of the choices – providing a habitat for the species we want to attract whilst giving public access and preservingthe landscape. We are hoping that Richard can do a return visit this summer in an early evening which will be easier for people to get to and could be lovely.

Richard is based is based in  Lancaster and is an RSPB wetland advisor. He has helped us with the management plans for the reserve

The second session was last Saturday afternoon a gorgeous early spring day. 25 of us went through the orchard and into Flora with Tarja Wilson who’s interest is managing hedges and hedgerow trees for the benefit of wildlife. Again there was an opportunity to go into the Flora fields and again discussion on the choices we face. The trees are a well loved landscape feature and attract interesting birds – flocks of red-wings feed from the berries in winter and on Saturday 3 reed buntings were in the venerable old Alder tree. However the crows and magpies perch on them patiently waiting for a movement in the reeds which enables them to spot a nest site and take the eggs – not encouraging for the snipe to nest there!

David Loxam came with us and pointed out his 50 year old hedge-laying, as well as the way the banks were built up to create a dyke. We walked long the land which we bought from NACRO where the ancient strip system is still evident and heard what a nuisance that was for the tenant farmer who had two lots of rent to pay in one field. When you knolw what to look, for the history of the landscape is all around the Flora and Fauna  site.

Tarja,who is the Environmental Projects Officer for Lancashire County Council was impressed by the work of today’s hedge – layers and was full of praise for what isbeing achieved.

The missing podcast, Mike Derbyshire’s talk on the agricultural history of the area, is now available. (Mike kindly repeated the lecture to a different audience as the first recording hadn’t worked.) Last weeks session with information on resources for historical research will be available shortly.

After Easter  Ian and Ken who did the metal detecting will be presenting their finds, and talking to us about their activities around Lancaster.

We also have the oral history session on the web

So we will soon have a  lot of interesting source material and would love it if history enthusiasts would follow some of it up .  One Fairfield member is interested in children’s play, based around the playground so if any-one has contacts with elderly residents I am sure she would be keen to talk to them.

Another suggestion has been oral history based round the farming families in this area, and another a time-line illustrating the history of the reserve.

I was surprised today on going up the steps into The Storey to see an image of a White park cow and calf on the screen in front of me. I thought it looked familiar then realised that it is taken from our leaflet and the city council are advertising the lectures ( for free ). So come along and learn all about them from Fraser on Thursday.

This area will be used to discuss any topics that came up in the lectures or site visits as part of the Flora ‘Open Learning Programme’.

Note: If you wish to add your own post, you will first need to register. Further information on how to do this can be found in the Blog Tutorial.