The fine sunny days this month have seen the insects and bees busily visiting flowers collecting pollen and nectar. On a warm evening as dusk approaches have a look at the perfumed honeysuckle. You may spot a moth or two.

Bumble Bees
Bees are not as common as they once where in our gardens and countryside. Fortunately, places such as our nature reserve provide food and a safe habitat for them. It may be just an old wives tale but the word ‘bumble’ is thought to describe their erratic flight as they stagger from flower to flower with their ‘shopping’ baskets full of pollen. Take a little time to watch them, as they sometimes struggle to take flight. 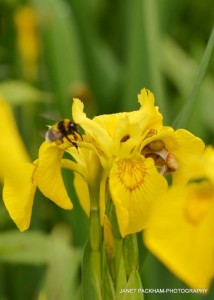 Bees are superbly adapted for collecting pollen. One pair of legs have baskets in which to put the pollen, a second has a comb with which to brush the pollen off their bodies and transfer it to the basket. On the third pair of legs is a hook, presumably used to scrape the pollen out of the basket when they arrive home! There are several species of bumble bee, some social and others solitary. Visit the website of the Bumble Bee Conservation Trust for more information and downloadable identification charts:
Bumblebee Conservation Trust

June Bug
And talking of bumbling, You may have had one of these bump into you as you walk or cycle along on a warm evening! Its flight is very erratic and it often flys into doors and windows!
Also known as a May bug the Common cockchafer (Melolontha melolontha) emerges in early May having spent up to three years underground as larva and pupa. This shiny brown beetle is about 4 cm long and easily recognised by its long feathery antennae.

Last week I observed a robin trying without success to get one into its beak. It did of course give up and go off in search of a meal of more manageable size!

Our local 13th Beavers visited the Fairfield Nature Reserve on the weekend of 8/9th June. The group were overnight ‘camping’ in their HQ and came to visit on Saturday afternoon and again on the Sunday. Surprisingly, they were still full of beans on this morning after their night’s camp!

The weather was warm and sunny and just ideal for spotting lots of wildlife. 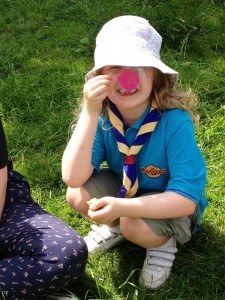 On Saturday the Beavers went on a sensory exploration of the reserve looking for textures, shapes and colours. This was followed by a well deserved cool drink and snack.

The children then set about a technology task in which they had to find their own way around the orchard using iPods and QR-codes, part of activities needed to complete their IT badge.

The afternoon finished with a wildlife game and another IT activity, before tired little Beavers left for their HQ and a fish and chip supper. Yummy!

On Sunday morning, using binoculars provided by the Fairfield Association, the group went birdwatching around the reserve. Lots of birds to be seen. After looking at some old bird nests, the morning at the Orchard finished with an active ‘bird’ game. The Beavers then took part in follow-up IT activities at their Scout Hut, using photos and videos they had taken in the Orchard to create their own PowerPoint presentations.

For anyone interested in birdsong who hasn’t already spotted this, the BBC is running a 90-second daily show highlighting the songs of British birds. Some general information about birdsong is available from http://www.bbc.co.uk/news/magazine-22298779.

If you aren’t generally up at 05:58 BST to hear the show on Radio 4, it can be heard and downloaded from:
http://www.bbc.co.uk/podcasts/series/totd

Hedgerow Flowers
The last two weeks has seen the appearance of our hedgerow flowers, several of them already mentioned in other blogs. It may just be my own perception of this but there seem to be more of them appearing in new places following the hedge cutting.
Blooming May
An English hedgerow would not be complete without the snowy white scented May blossom of the Hawthorn. The blossom attracts many insects and the tree itself provides a habitat for many animals; nesting birds, spiders and other invertebrates on the leaves and in its furrowed bark.
The young leaves have a slightly nutty taste. When I was a child we knew them has ‘bread and cheese’. No idea why!
Hawthorn Mythology
Hawthorn trees can live for many years, some are hundreds of years old. So it is no surprise that the ancient hawthorn features in centuries of myth and legend.
Fairies are said to live in and around them. Anyone falling asleep under the hawthorn tree could find themselves carried away by the fairy people.
Have you ever wondered why one sometimes sees one or two isolated gnarled and windswept hawthorn trees in a field or on a hillside? These ‘lone trees’ are the fairy trees. Cut one down at your peril!
Britain’s most famous hawthorn is the Holy Thorn of Glastonbury. Legend tells of how Joseph of Arimathea arrived at a hill overlooking Glastonbury Tor with a few disciples and two sacred vessels containing the blood and sweat of Jesus. Where he thrust his staff into the ground it sprouted and grew into a thorn tree. Though the original is obviously not there any more, one of its supposed descendants does still stand on the hill.
May blossom featured in early May festivals. Before the calendar changes of the C18 it would have been in flower earlier in the month.
Marsh Marigolds
In the marshy area near the middle entrance to the Orchard is a wonderful display of yellow marsh marigolds. Quite an abundance following the cutting back of the dogwood earlier this year.
Help with identification
Don’t forget, the Association has a selection of ID charts (birds, insects, trees etc) which you are welcome to borrow.

After the unusually cold weather in March, we are still waiting for its wildlife to appear! A solitary Brimstone butterfly was spotted in the sunshine last Saturday morning. The few days of relatively warmer weather have encouraged the appearance of some tentative leaf growth. So optimistically, here are a few things that may be seen in the coming weeks:

Spring Flowers and Blossom
The delicate white flowered wood anemone and the first blossom of the year, the buckthorn and blackthorn should be making an appearance this month. The celendines are now beginning to appear.

Summer Visitors
As you will see from our blog entries the summer migrants are beginning to arrive. For many people the first swallows are signs of summer to come. As you enjoy their aerobatics as they swoop across the meadows, it is sad to think that only 1 in 4 of their chicks will make the journey to S Africa and back again for next year.

Already here too is one of the first arrivals, the little chiff chaff having made its long journey from West Africa. It is often to be seen and heard in a morning or evening in the tree tops at the north end of the Orchard. And yes, its very recognisable call is a repeated ‘chiff chaff’! For me, the melodic down the scale song of the willow warbler heralds the arrival of spring as it sits at the top of one of the tall trees. 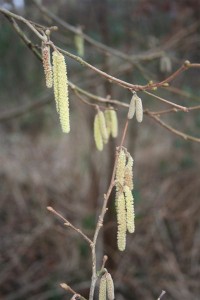 Time to get Wildlife spotting. Let us know what you see around the Fairfield Orchard and FAUNA Nature Reserve.  Remember – wildlife is both animals and plants!

Looking forward to having Dallas Road’s Year 4 in Fairfield Orchard on Wednesday 23rd January to learn about habitats.