This morning’s tally of snipe was a measly 15 (including 1 jack). 14 flushed in Big Meadow, one in Hay Meadow. This season is running well behind. The total for the winter so far is standing at 73. In all but one of the previous years we have been over the 200 mark at this point.

Better news was the sighting of two woodcock in Upper Sowerholme by one of the team whilst the others were distracted by a roe deer. There were also five teal on School Pond.

The flush count this morning revealed a measly total of 22 snipe, 3 of which were jacks. Three birds in the Hay Meadow, the rest in Big Meadow. The running total for this winter stands at just 58, the lowest it has been since we started the winter counts in 2013/14. But it is still mild and also today very wet in the marshes, so the snipe may well be on alternative feeding sites.

Better news was a sighting of two brown hares (separately) in West Field. A small roe deer moved off into Upper Sowerholme, and quite a large frog was disturbed in the Hay Meadow up towards Lucy’s Pool.

I took this photo at 5.20 a.m. on the 19th June. The two roe deer were in our garden which adjoins Upper Sowerholme.

Whilst on a walk along the Pads footpath this afternoon one of the regular dog walkers reported to me he had just seen (1.30pm) a small owl with vole like creature in its beak flying from Pony / Little wood area across to the small copse in Mr Ayrton’s fields.

As this was a diurnal sighting of a small owl we thought it highly likely to be a little owl.

The same man observed two roe deer last week crossing West Field, jumping over the Pads footpath and disappearing across the Flora field. He has a video of the first section.

I encouraged him to join the blog. 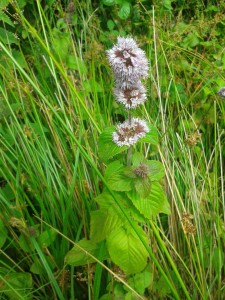 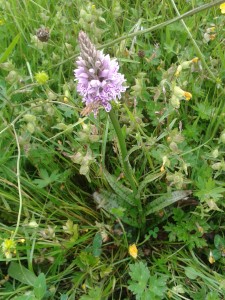 As the Ragwort Working Party entered the Hay Meadow this morning we disturbed a roe deer in Upper Sowerholme. It bounded across the boggy land and away towards Flora.