Highlights of a brief walk around the reserve boundaries this evening were:

There was a lapwing prodding about in the muddy edge of School Pond this morning. It flew off in the direction of Flora Field.

Posting on behalf of Graham. In addition to the lapwings, he noticed a pair of shelduck in Flora Field this morning. They seemed quite interested in one of the grass fallow strips. He wonders whether they might have been looking for a nest site?

Whilst hedge laying yesterday in the east hedge of West Field we came upon our first birds’ nests in over 150 metres of laying – and three of them! 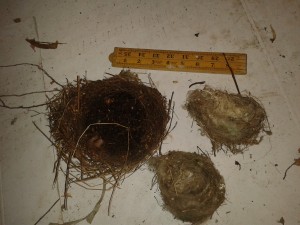 I was in the West Field this morning having a look at the hedge we laid and ‘gapped up’ this winter. Things seem to be coming along fine. It is noticeable just how few flowers there are in the previously heavily fertilised field, unable to compete with the grass. However, it was nice to see a few bluebells coming up in the hedge bottom and toward the northern end of the field there are quite a few cuckoo flowers as well as lots of the inevitable chickweed. I did notice a little common vetch and common mouse ear as well.

Lapwings again in the Flora Field and that very noisy woodpecker in the Wood.

Whilst it was still bright and sunny, we wandered round the boundaries of the nature reserve early yesterday evening. The woodpecker in Pony Wood was going at it hammer and tongs, the sound carrying far across the fields. After hearing from Jon Carter about the decline in recent years of greenfinch numbers because of a virus, Paul was delighted to see a couple as we paused on the Long Pads path. They were perched briefly on a wire fence at the boundary between Flora Field (new name for the arable) and Lower Sowerholme (formerly known as Gleesons field). But we couldn’t spot the grey partridge in West Field, and were starting to think that the lapwings had moved on. Just as we were about to get to the end of the reserve by the Aldcliffe Road houses, we heard a brief call: two displaying together over the ridge of Flora Field. One promptly landed at the top of the field, silhouetted against the skyline, distinctive crest showing clearly. Magical.

As well as this, lapwings seen and heard around the ploughed field for the third consecutive day and a particularly noisy woodpecker at work in Pony Wood

At least two lapwings soaring and swooping over the ploughed fields this afternoon. In amongst the gulls and crows but the distinctive ‘pewit’ was definitely there