Whilst we were working in West Field this morning 20 plus redshank were observed feeding at the edge of the pond.

On the 4th Jan, walking towards the orchard from the Long Pads, Hilary and I saw a bird struggling on the ice on Alder Pond ( the pond had been drained so there was a  layer of ice over the mud). The bird took off carrying a smaller bird in its claws. A passer by said that it was a kestrel carrying a snipe but it looked too white to me ( without binoculars!!) and Dan thinks it was more likely to be a sparrow hawk. It had most probably caught a snip feeding nearby , dropped it onto the ice and retrieved it with difficulty hence the struggle. Very dramatic.

A flock of about 30 redwings feeding in the vicinity of Alder Pond in Big Meadow this morning.

Whilst we were working in West Field yesterday (19th) a small group of birds, perhaps a dozen or so, were feeding at the far edge of the pond. We did not have binoculars but the informed opinion was that they were redshank.

Two shell duck observed on School Pond on the afternoon of 19th April.

During a walk around Fairfield yesterday afternoon we saw two curlews, first in Big Meadow and then in Lower Sowerholme. 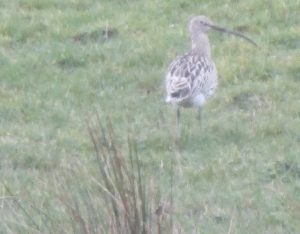 Yesterday’s flush count was most satisfying: the second highest monthly number of snipe since the counts started in January 2013 and a new record for Big Meadow. A slow start with 3 in the Hay Meadow and 6 in School Pond, where the whole area was awash. But in Big Meadow, they were flying up in groups. 110 counted, eleven of them jacks. Add in the one seen earlier by Graham on his walk-through in Lower Sowerholme gives a total of 120. Now well ahead of the measly score for the whole of last winter.

Snipe were not the only highlight. Meadow pipit were seen in Big Meadow and School Pond, where a scurrying vole was almost trod on. We also saw the curlew spotted by Christine. It was feeding in the southern end of Big Meadow and then moved to the Willow Pond area of Lower Sowerholme. A male peregrine flew westwards over Big Meadow.

On the more grizzly side, but evidence of wildlife presence, there was a mallard skull in Big Meadow, a skinned hedgehog in School Pond and some dried out frog spawn on the grass in the Hay Meadow.

As the Saturday volunteer group were working along the Long Pads footpath a large flock of linnets were alternating between Flora Field and West Field. Well over a hundred I would say.

The Wednesday Work Group watched a kestrel hunting over Big Meadow but the highlight  was the frequent sighting, over the course of all the morning, of a curlew busy amongst the soft rush.