A nice surprise, hunting near the stone wall alongside the canal

Seen a few barn owls at stodday recently, too

Apparently a lot of them about this winter

Also, haven’t posted for a while, but have seen a green parakeet around these parts recently, including fauna

Barn owl out hunting over the meadow this morning at 8am

05/01: This morning at 10am I saw 3 small deer emerge from the trees near the corner of the Fauna path. They wandered along that Sowerholme field (I think that’s what it’s called!) then jumped over the fence/hedge into Flora Field. They then wandered up to Pony Wood for a bit then returned back to where they came from. Later (about 4pm) one of them was out again in that Sowerholme field (again, not sure what it’s called!)

I also saw a load of linnets in flora field yesterday (Friday) afternoon.

Whilst preparing for the Ragwort Working Party yesterday morning a woman passing by told us that she had seen baby barn owls at dusk on the top of the shed stone wall. She said that they and their parents could be heard calling to each other in the trees. We looked and listened after the volunteer session last night but without result.

Newly observed flowers include teasels in the Orchard: 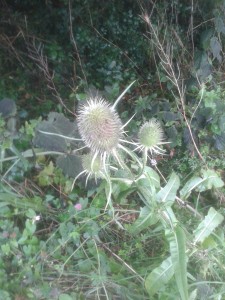 The first of our wildflower plugs in flower: greater bird’s foot trefoil: 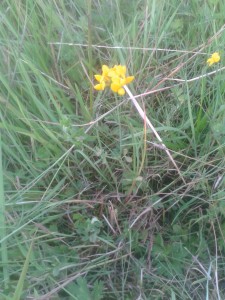 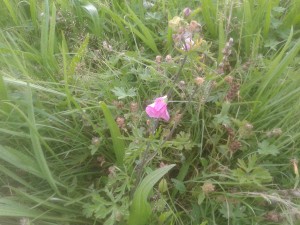 After the dryness of the early autumn, the marshes are now awash. And the snipe are coming back in numbers, although with the temperatures remaining above average we did not count quite as many as in the last two years. Total count today was 45, broken down as 11 common snipe in School Pond, 32 common and 1 jack in Big Meadow and surprisingly a sighting of one in Pony Wood. In addition, there was a group of eight flying round. Despite the fog, Jon was able to follow them for quite a while, but they did not appear to land on the reserve. We also saw a small group fly up as we approached the Big Meadow marsh, disturbed by three dogs off the lead on the footpath. So overall quite a good number of snipe around.

Other sightings included a heron on the Grammar School Field, three teal on School Pond, a sparrow hawk above the Hay Meadow and 4 meadow pipits in Big Meadow.

Jon has also had a sighting of the barn owl, and advises going out at dusk for the best chance of seeing it.

Over fauna fields 4.30 pm today. Crows chased it into the orchard and lost sight. However seen again hunting over the ploughed field. Very excited to see one around these parts.

Very late dog walk along the path between the Orchard and Cromwell road, I came upon a barn owl sitting on one of the fence posts.  Not sure if it was confused by my bright head torch but it allowed me to get within 2 feet.  Only flying off when I said “hello owl”.  As it flew up another barn owl flew into my torch beam and both owls made off towards the allotments.

On the way back, two tawny owls were calling to each other in the trees by the farm house. Unfortunately I did not get chance to see them, but was entertained by their noisy calls for a good 5 minutes before I was reminded by my dog that we were supposed to be on a dog walk, and I headed home a happy man.