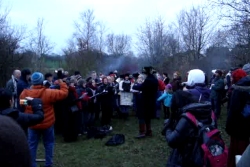 Singing at the 2013 Wassailing Event

Well over a hundred people attended the sixth annual Lancaster Wassailing on Saturday 19th (we’ve actually only done five since 2011’s event was called off due to bad weather). The event is always held on the closest Saturday to Old Twelfth Night and follows the same general order of service each year. We begin with a noisy procession through the orchard to scare away evil spirits. This is done by making as much noise as possible – banging pots and pans, drums and chanting. Traditionally blunderbusses were also fired into the trees, but we seem to be a bit short on blunderbusses at the moment. Whether or not you believe in evil spirits will be a question of your own private theology, but for those who are resolutely wedded to the 21st Century metaphysic there is still the wholly plausible explanation that the noise will disrupt the breeding cycle of fruit tree parasites.

After the procession we are usually entertained by either a Mummers Play or a series of dances by a local Morris side. This year as last we were entertained by the always splendid (and Lancaster’s own) John o’Gaunt Morris. After that was the choosing of the Oak King and Apple Queen – and we were fairly inundated with applicants this year – so much so we ran out of lots to draw! With the monarchs carefully selected we moved on to the core rite at the centre of the Wassailing liturgy – the hanging of cider soaked toast on the trees and the libation of the roots. This is another ritual act with a materialist interpretation. The toast attracts birds which eat insects harmful to fruit trees. After that we nominated the Knights and Ladies of the Orchard – those volunteers who have made contributions over and above the call of duty in the preceding year.

At this stage in proceedings the all important passing of the Wassail Cup begins, and after ye olde raffle we retired to stand around a blazing fire, sing a traditional Wassailing song (from Carhampton in Somerset) and be thoroughly entertained by the good offices of The Gladly Solemn Sound – a Lancaster based West Gallery Music choir. It is hard to date the origins of the Wassailing tradition, but certainly it became popular in the seventeenth and eighteenth centuries – which is exactly the period from which the music the choir sings heralds – so it proved to be a fitting way to round off the afternoon. Warmed from within by the excellent spiced cider, warmed without by the fire, and warmed in the core of our beings by the beautiful singing and the general sense of community bonhomie, we all returned to our hearths happy and content. We’ll do it all again January 18th 2014.