A lovely sunny morning for the final flush count of the winter. The highlight was the four jack snipe found in Big Meadow, unexpected this late in the season. They were demonstrating typical jack behaviour: taking off when almost stood on, making no sound, no noise of wings and landing back into the marsh a short way on. Even if their smaller size and shorter bill can’t be seen this is enough to distinguish them from common snipe. Including these jacks, the total number of snipe flushed was 17: 12 in Big Meadow, 2 in Hay Meadow and 3 in Upper Sowerholme. About par for this time of year.

Total snipe sightings for the 2017/18 season were 351. After an excellent start, this final result is slightly lower than the last three years. Notably numbers in School Pond have been disappointing: 54 this winter, against 100+ in previous years. But compensated to an extent by a rise in Big Meadow, the 238 counted this winter being only slightly below the 2014/15 peak.

Other sightings as we walked around were: a kestrel flying over the Hay Meadow; a late redwing in Carr House Meadow;  in Upper Sowerholme frogspawn in the Channel, 2 teal, a male pheasant; in School Pond 5 teal joined by the 2 from Upper Sowhrholme, a moorhen and two mallards; in Big Meadow another two mallards, a brown hare, and a female sparrow hawk overflying. Heard were a chiffchaff by Lucy Brook and a greater spotted woodpecker.

I walked along the path from the Fairfield Orchard to the Cromwell Road gate this afternoon at about 2:45 pm.  The weather was cold but sunny.

There was one song thrush in the Big Meadow not far beyond the map board.  I watched it for about 5 minutes and it did not move much.

Continuing to the School Pond I spotted teal.  In the end I counted 5 pairs; so a total of 10.

They were spread around the edges of the pond initially but went into the water eventually.  However they stayed visible on the water and did feel the need to retreat to the reeds on the far side of the pond.

There was also one moorhen around the School Pond.

According to the Internet, the collective noun for a group of teal is “a spring”.  Hence the title of this post.

The cold wind and snow flurries have kept the Fauna footpath unusually quiet today. So less disturbance for the heron which was around over a period of at least an hour wading about in the Hay Meadow pond. Could not identify what it was catching, but it seemed to be quite successful. At one point it was enjoying the clear water with a mallard.

Here’s what we did

The forecast was for continuous rain on our volunteer Saturday which perhaps restricted numbers to 8 but it turned out to be dry and remarkably warm.

Walking around the arable field this afternoon we saw these two brown hares enjoying the sunshine.

Also around were a pair of stone chats checking out the new saplings. 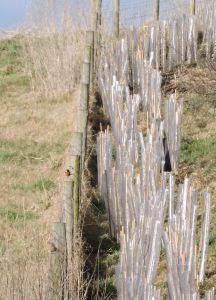 I believe this one is the female stonechat.

Also near the gate by Pony wood were a robin and this wren. 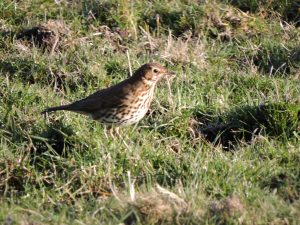 Then by the paddock we heard curious tapping coming from a nest box, 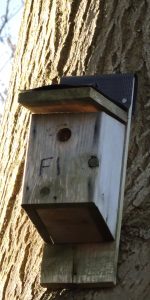 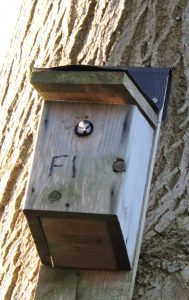 The marshes were slightly less wet for this month’s flush count, and the temperature feeling pleasantly mild after the last few days of cold and wind. But not many snipe in evidence. 7 in the Hay Meadow, 5 in School Pond, 17 in Big Meadow (4 of them jack) and 6 in Upper Sowerholme. Total of 35 was actually comparable to last year, but well short of March 2016’s record tally.

But if we weren’t calling ‘snipe’, there was a lot of other wildlife to grab our interest:

Plus the heron again near Lucy Brook yesterday morning. And not forgetting wrens which seem to be everywhere in our hedges at the moment.

A very bleak day but we saw three stock doves in Big Meadow and 6 or more Fieldfare in the Hay Meadow – they seemed to be in very smart plumage so maybe thinking that the breeding season is fast approaching.

After dark, walking across the Fauna path with Glenys, ghostly shapes of snipe moving around.

On the way back from the hedge planting this lunchtime, there was a Heron in Friar’s Pond and a Lapwing happily feeding at the northern end of Big Meadow.

Yesterday, Wednesday, about 14:45 I was walking along the footpath from Aldcliffe and getting close to the Big Meadow when a little white egret flew in front of me near the houses .  It was coming from the estuary and flew onto the reserve.  It was flying east just south of the Big Meadow and then turned to go behind the willows in the Hay Meadow.  I could not see from my position where it landed.

Continuing my walk I saw approximately 10 fieldfare in the Big Meadow.  They were about 2/3 of the way from the Alder Pond to the Hay Meadow.  They kept flitting about so difficult to be certain about the number and it was very cold so could not watch for long.