Sharp-eyed Ken spotted a brown hare this morning as we were setting up to do some hedging. It was in the hedge between Lower Sowerholme and Flora Field. 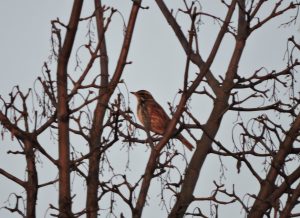 One of a pair of redwing in the gun range this afternoon. A great spotted woodpecker was drumming in Pony Wood, and linnets and fieldfare were around in numbers. 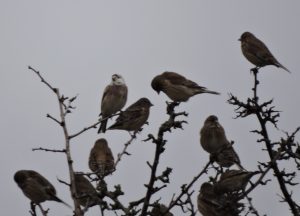 Walking round Fairfield yesterday afternoon I observed numerous fieldfare in four locations (all just outside the reserve), as well as about 36 linnets in the hawthorn. I wonder whether the white-headed one will be back next year. There was also a mistle thrush (the software keeps changing it to the more exciting missile thrush), a grey heron, and exiting onto Cromwell Road there were 50-60 goldfinch in the trees which took off when a train came through – they headed off to Haverbreaks.

Group of three snipe observed this morning in one of the scythed rides behind Cromwell’s Pond. Just sitting there hanging out.

Sorry I didn’t give notice of the session as I thought the blog was ‘under repair’. Now I know its back up and running here is the report of what we did.

A rather disappointing turnout of only 11 volunteers on a lovely winter’s morning. Problems with temperamental hedge trimming machines also made for a poor start but once under way we got a lot done:

Given the strength of snipe numbers so far this season, we were expecting a busy time this morning. But the outcome – a total of 37 including 2 probable Jacks – was considerably lower then in 2014 and 2015, albeit only i less than last year. The relatively mild conditions perhaps? Split was 13 in Hay Meadow , 2 Upper Sowerholme, 13 School Pond and 9 Big Meadow. There were 4 teal in West Field. Three teal took off from School Pond and were later seen flying away from Alder Pond. Two jays were in the  Carr House Meadow/Gun Range hedgerow, and a heron was spotted flitting around the reserve. There was a lot of evidence of small mammals (voles?) feasting on the soft rush..